Sad news was given to us today. The famous Dominican fashion designer, Oscar de la Renta lost his battle against cancer on October 20, 2014 in his home in Connecticut at age 82 surrounded by his family.

The news of his death was given by his step daughter, Eliza Reed Bolen, also executive of the fashion house, with a handwritten statement signed by her and her husband Alex Bolen.

“While our hearts are broken by the idea of life without Oscar, he is still very much with us. Oscar’s hard work, his intelligence and his love of life are at the heart of our company,” the statement read. “All that we have done, and all that we will do, is informed by his values and his spirit. Through Oscar’s example we know the way forward.”

De la Renta became famous for dressing Jackie Kennedy in the 1960s and from then on continued his great escalation into fashion history by dressing many other first ladies and A-list celebrities. From Taylor Swift to Hillary Clinton and Michelle Obama, De la Renta became a legend in the fashion world. Just a few weeks ago, everyone was talking about the beautiful bridal dress he designed for Amal Alamuddin’s wedding to Hollywood’s beloved actor, George Clooney.

De la Renta started out working as an apprentice for Cristobal Balenciaga, then he moved to Paris where he worked for Lanvin and in 1965 he started his own brand with his name, Oscar de la Renta. His creations are timeless and feminine, they make any woman wearing one of his outfits look stylish and classy.

He leaves behind his second wife, Annette, his son, Moises, three stepchildren, and nine step-grandchildren.

Below you can look at some of the outfits De la Renta presented this past September in New York during  Fashion Week for his Spring 2015 collection. 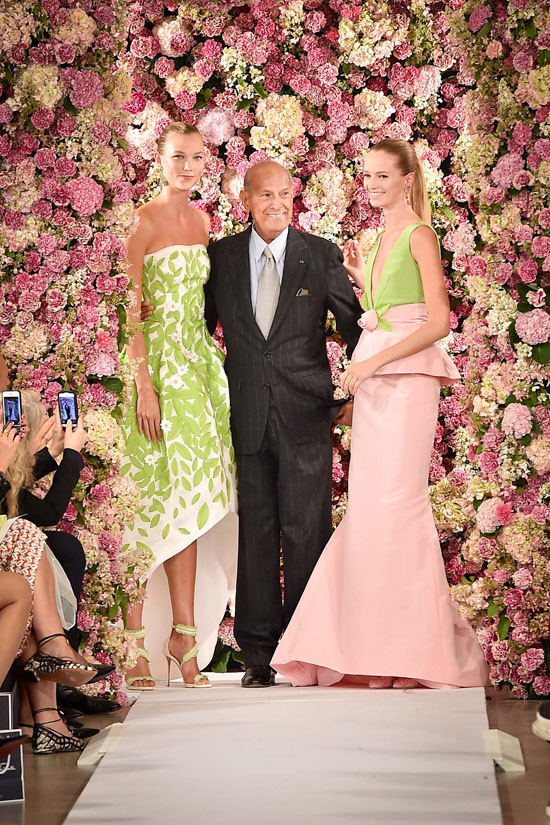 « Out of my comfort zone
Street Style Lessons from Celebrities »